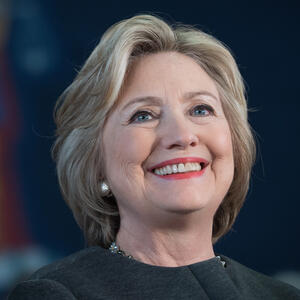 Hillary Rodham Clinton has served as Secretary of State, Senator from New York, First Lady of the United States, First Lady of Arkansas, a practicing lawyer and law professor, activist, and volunteer. As Secretary of State for President Barack Obama, she built a coalition for tough new sanctions against Iran that brought them to the negotiating table, and she brokered a ceasefire between Israel and Hamas that ended a war and protected Israel’s security. She was a forceful champion for human rights, internet freedom, and rights and opportunities for women and girls, LGBT people, and young people all around the globe. In July 2016, she became the first woman to earn a major party’s nomination for president and went on to earn 66 million votes. In November, Netflix released the Hillary and Chelsea Clinton-produced documentary In Her Hands, a feature about Afghanistan’s youngest mayor, Zarifa Ghafari, and her struggle to survive under Taliban rule after Western forces withdrew from the region.